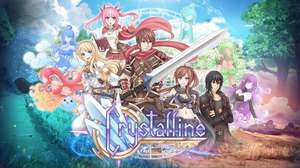 The protagonist finds himself mysteriously transported to Terra, a fantasy world empowered by magical crystals. Not long after arriving does he run into Leanna, a Mage-Knight investigating rumors of concentrated energy in the area… which she learns is radiating from him! Together, they journey to understand how he got here and a way for him to return home. They soon discover that his arrival to Terra is more than just a coincidence!

Crystalline is a comedy-centric, fantasy adventure, visual novel with an intricate romance system. With hundreds of choices available, you can experience the storyline and interact with characters in a much more personalized way.

In the year 2049, mechanized robots commonly called GEAR were developed for military application. Since then, their versatile functionality has led them to not only become commonplace in commercial use, but also spawned an entire sports entertainment industry. The prevalent use and popularity of GEARs has created a new academic field known as “Cenorobotics”.

Due to unforeseeable circumstances, the protagonist finds himself transferring to ACE Academy, a premier school for Cenorobotics studies in Japan. He struggles to find a team willing to accept him and his outdated “American” GEAR to compete in the intramural tournament. When compared to the sleek, robust, and advanced technologies of the Japanese counterparts, his search feels utterly hopeless. That is, until he finds a group of pilots just desperate enough for another member. This is where your story begins.

Following Kaori's ending in ACE Academy, your now girlfriend has invited you to spend Christmas and New Years with her family. Your trip takes you to the countryside of Isokaze, where her parents and twin sisters are surprised to see that Kaori has brought a boy home! From meeting the parents, enjoying winter activities and spending intimate time with Kaori to learn more about her and her past, it will be a holiday to remember!

While returning home from his first day of high school, our Protagonist encounters a strange woman who encourages him to make a wish at the shrine. Although skeptical, he unwittingly summons Erilynn, a beautiful yet bold princess from another world! With no idea how she came here or how to send her back, the two must put aside their differences and work together to unravel the mystery.
ShareTweetTeilen Teile per WhatsApp Teile per Messenger
Zusätzliche Info
Beste Kommentare
15 Kommentare
Dein Kommentar