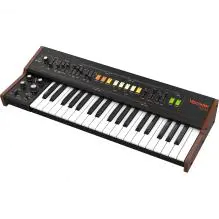 Relive the glory days of vocoders and string synthesizers with Behringer's VC340. It has the same look and sound as the old Roland VP330 Vocoder Plus string machine it's based on, but adds a number of modern features too. The original VP330 was hugely popular and used extensively in soundtracks as well as music styles like synth pop and New Age.

Behringer VC340The control panel is relatively straightforward with a number of buttons and sliders allowing you to adjust the vocoder, human voice and string settings. If you want an idea of what the strings sound like, listen to the soundtracks from films like Chariots of Fire, Antarctica and Blade Runner that were done by Vangelis. The ensemble effect sizzles with character and will fill your mixes beautifully without getting in the way of other sounds. Just like the original model by Roland, you can connect a microphone to the VC340 for a great vocoder effect. It may be meant for voices, but why not try running a drum loop through it for kicks and giggles.

Modern features, vintage soundThe fact that the Behringer VC340 has modern connectors and features like USB MIDI alongside traditional MIDI is something that makes it a lot more practical than tracking down an original VP330. It's perfect for use in the studio and on stage, so if you're looking for vintage vocoder and string synth sounds, get Behringer's VC340.