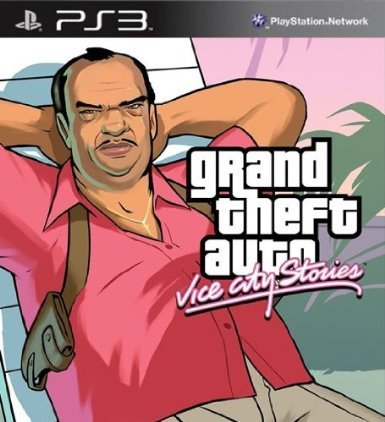 Vice City, 1984. Opportunity abounds in a city emerging from the swamps, its growth fueled by the violent power struggle in a lucrative drugs trade. Construction is everywhere as a shining metropolis rises from foundations of crime and betrayal. As a soldier, Vic Vance has always protected his dysfunctional family, his country, himself. One bad decision later and that job is about to get much harder. Kicked out onto the streets of a city torn between glamour and gluttony, Vic is faced with a stark choice - build an empire or be crushed.

Impressive graphic overhaul
Vice City Stories is a monumental improvement upon the previous Grand Theft Auto title on the PlayStation Portable. For one, the draw distance has nearly doubled so that buildings and features can be seen across town. Character models and cars are as detailed as if they were on the PlayStation 2 and include all of the shine and transparency that looked so great in other Grand Theft Auto titles. Players can even choose the clothing that Vic will wear in Vice City. Overall, Rockstar has substantially increased all visual elements so that you don't need to make any graphical sacrifices when taking Grand Theft Auto on the road.

Expanded gameplay
New characters never before seen in Vice City add new twists to the story gamers were introduced to in the PlayStation 2 Vice City title. With a playtime of over 15 hours for the storyline alone, there is certainly plenty to see and hear in and around the city. Choose from various objectives to complete such as doing stunts for a chocolate commercial, chasing a known drug dealer to swipe his loot, and patrolling your neighborhood for specific thugs. Knock down objectives and get swept up in the plot or sit back and explore the big city- the choice is yours!

The hallmark style of "sandbox" gameplay is ever present and players can (forcefully) take control of nearly any vehicle they see and roam the streets in search of interesting characters and opportunities. In addition to cars, busses, bikes, and trucks, you can now cruise the waterways of Vice City in a large number of water craft! Jet-skis, motorboats, and even fishing vessels are there for the taking whether you're tracking the bad guy or just killing time. If you need even more mobility, consider one of the many arial options such as helicopters- helpful for taking out enemies from afar.

Play as Vic Vance, brother of Lance Vance, a member in one of the most notorious families in Vice City
Featuring new vehicles such as sea planes, amphibious vehicles, jet skis, and more
Swim and fly in Vice City, a location twice as large as Liberty City
An entirely new chapter, including new characters, new storyline, and classic locale of Vice City
Build your criminal empire in Empire Mode, a stunning new gameplay mode
An exciting selection of new multiplayer modes will be available
Developed by Rockstar Leeds & Rockstar North
Featuring the most impressive soundtrack ever devised, with a scope that exceeds any other Film, TV program, or videogame in history
ShareTweetTeilen Teile per WhatsApp Teile per Messenger
Zusätzliche Info
Amazon.com AngeboteAmazon.com Gutscheine
Sag was dazu FolgenFür später speichern
18 Kommentare
22. Sep 2014