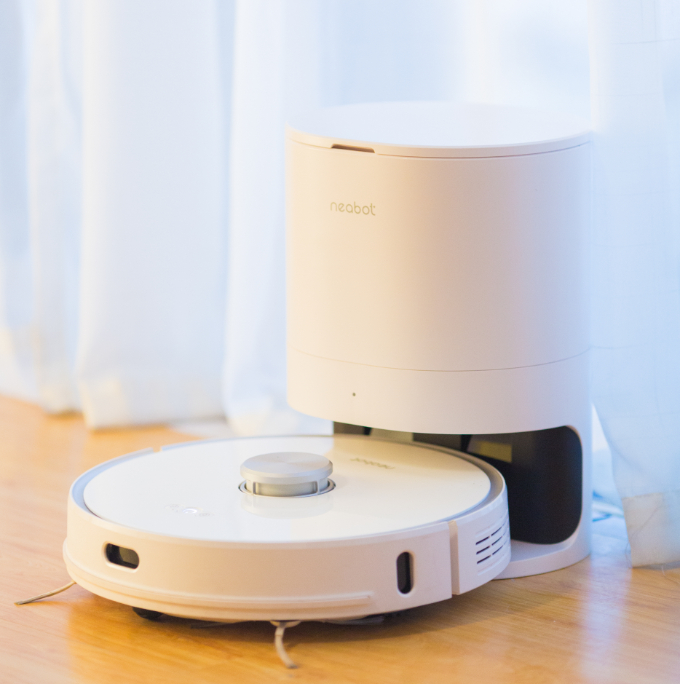 Neabot is the most powerful robot vacuum featuring an innovative self-emptying dustbin system. With Neabot, it makes it possible for you to schedule your cleaning and let it do the rest without any intervention even for weeks.


For years of evolution, floor vacuuming with the robot still remains little more than a tedious housework for us. Poor navigation, inadequate delivery. Not to speak of the inconvenience of emptying and cleaning the dustbin for it. Very frustrating!

Thankfully, Neabot is here to make your life easier. Neabot can empty its dustbin and resume the cleaning task automatically without you interacting with them. So you can forget about the cleaning chores for weeks and focus on other productivity tasks.


Forget about vacuuming for upto a month with Neabot self-emptying dustbin. Neabot automatically transfers the dirt collected from the robot into the bag-lined dustbin without you having to touch the mess.


Set it and forget it! The Auto-sealed dust bag holds 2 to 4 weeks of dirt and debris for easy disposal without the cloud of dust.


Neabot can easily carry out more heavy cleaning tasks with its unbeatable suction power of 2700Pa. Two side brushes and a roller brush effectively loosen, extract, and vacuum dirt to give a superior clean.


Utilized 3 levels of suction power including Small, Regular, and Strong modes, Neabot easily tackles any mess whether for regular or deeper cleaning.


Neabot comes with smart carpet identification that recognizes carpet flooring and automatically boosts the suction for extracting pet hair and other debris from carpet fibers. And it can climb across thresholds of up to 2cm in height with ease.


Neabot can learn the environment and figure out an optimized cleaning routine. The technologies of Lidar Navigation and the Simultaneous Localization and Mapping (SLAM) literally make Neabot smarter than ever.


Neabot uses a z-shaped vacuuming pattern, instead of just randomly traveling around, which tends to be a more efficient way to clean.


Once the map is saved, you can ask Neabot to clean the rooms that you want it to and set the daily cleaning strategy as you wish.


With a room map saved, you can tell the robot to clean only certain parts of the room and to stay out of others. Simply drag the bounding box to the area you want cleaned, it's done.


You can also place virtual "no-go" zones from within the app, sectioning off any particular areas or boundaries to prevent your robot from going there.


Neabot allows users to schedule a specific room to be cleaned at different times and on different dates, providing truly convenient and effortless home cleaning.

You can direct the robot to clean any exact spot you want it to clean and it will clean the localized area of 5*5 ft (1.6*1.6 m) around it.


What makes a robot cleaner robotic is the precision of the navigation sensors. With multiple smart sensors, Neabot avoids obstacles with ease and tackles tough terrain effortlessly.


When Neabot knocks into something, its bumper retracts and the sensors tell the robot to find a clear path.


The cliff sensors help Neabot sense the edges and avoid it falling from heights.